The Greylag goose is the largest of the 'grey' geese and is the last goose to migrate South, 'lagging' behind the others, which led to its name.

They achieve adulthood in the second winter and are the most southerly breeding of the 'grey' geese.

The Greylag goose is the only goose that is indigenous to the British Isles.

The Greylag Goose is the ancestor of the domestic goose.

The Greylag Goose is very similar to the Bean Goose.
(Compare the two Geese)

Appearance - Male
The Greylag Goose has a Grey/Brown head, neck and plumage with pale fringes on the feathers. Underparts are Light/Grey with a White belly. It has Pink legs and feet with an Orange or Pink bill.

Breeding Time
Early May in Iceland, Late April in Scotland and earlier in mid-Europe. 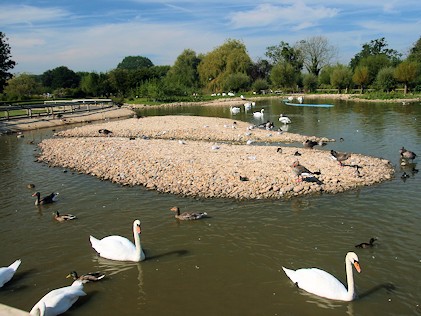 The Greylag Goose can be found in Swan Lake, along with the following wildfowl:-