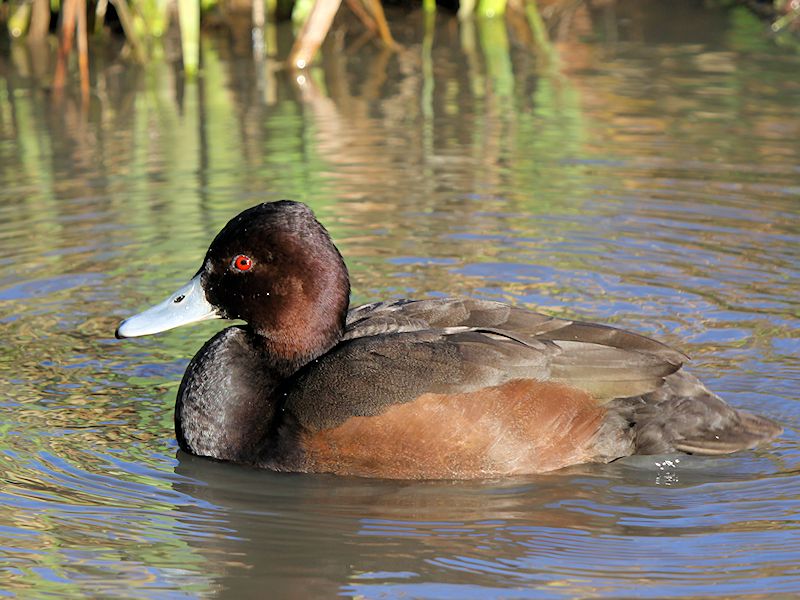 The Southern Pochard is a Diving Duck and feeds by dabbling or up-ending or diving mainly at night.

The male Southern Pochard is similar in appearance to the Ferruginous Duck but is distinguishable by the Red eye rather than the White eye of the latter.
(Compare the two ducks)

The Southern Pochard population is threatned by habitat loss and has declined over recent years but due to the size of the population it is currently classed as Least Concern.

Appearance - Male
The male has a Black head, Red Eyes and Light Grey bill with a Black tip. The neck and breast have a Purple iridescence, Chestnut Brown flanks, dark Brown upper-parts and tail. The legs and feet are dark Grey.

Appearance - Female
The female Red/Brown head with a darker crown, Brown eyes and a Grey bill. The cheeks have a White crescent, the throat is White, Brown under-parts, White under-tail and dark Brown upper-parts.

Breeding Time
March to December depending upon location.

Nest
The nest is built from plant material in a basin shape, concealed in vegetation close to water.

The Southern Pochard can be found in the Lesser Flamingo Zone, along with the following wildfowl:-